Man, someday I’ll have a garden.

And I’ll grow little pickle cucumbers, and cherry tomatoes, and herbs, and flowers I’ll do it all on my own. And I’ll be a grown up.

But for now, I don’t have a backyard or a green-0thumb so until those happen, the farmers market gets my money.

Mama had a garden when we were kids. I hated bugs though, we’ve already talked about this.

But I actually enjoyed the evenings when Ma asked my sister, Leah, and I to go fetch cucumbers for a dinner salad. We would dash out the back French door, no shoes typically, our dog Hershey running closely behind, and we’d return with arms full. Cucumbers in bounty.

Last week, I bought fresh dill from the market and didn’t really know what to use it for. But these little cucumbers were sitting in their sale basket along the sidewalk, and it just made sense.  They’re called “bush pickle cucumbers”.  A crisp refreshing salad ensued!  It’s actually quite simple. Cucumber, dill, vinaigrette.

And beautiful too! All the different greens and textures.
I love the pretty foods.

Summer bbq side dish? Or a fancy “starter” salad before a main dish? Yes to both, either, any:)

Here’s a quick run down, and the ratio of cucumber to dressing is up to you! 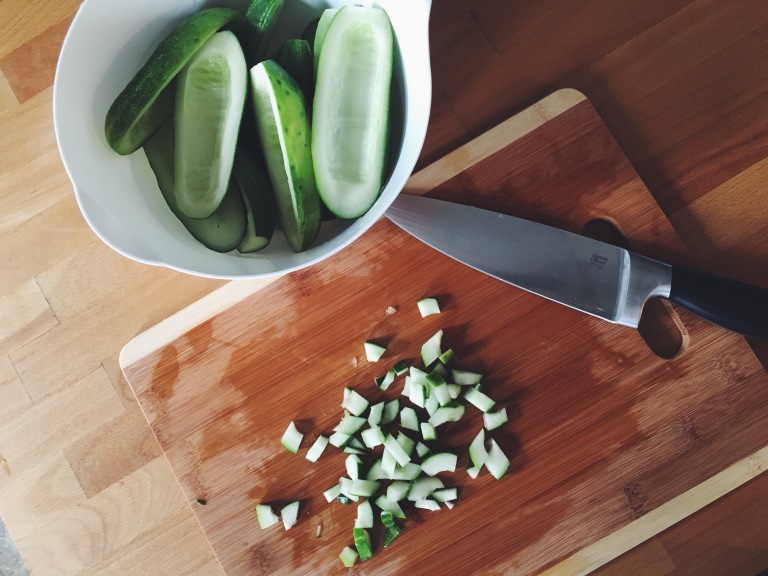 Place chopped cucumbers and dill in a bowl.  Mix the dressing really well so it thickens.  Using as much dressing as you’d like, toss it all together in a bowl.  I had about 1/4 cup left over.

A heads up for leftovers, the next day my salad had a bit extra liquid, from the cukes overnight. So I drained it and added garbanzo beans and cheese, making lunch that much easier:)

from my Tiny Kitchen,
glorieanna